that occurred during the 04 July 2009 "Thunder in My Hands" experiment.

First, THANK YOU, to James @ Hell in a Handbasket for bringing this up to start with and then directing all the traffic to this site. Second, THANK YOU, to all of you who have commented and e-mailed about the topic. I have learned that I don't know Jack about audio... oh well, what can you expect from a metallurgist?

Starting around 13:00 on my back veranda (also discussed as the 25 Backyard Range of Doom™), the gear is assembled. 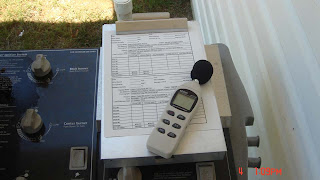 The meter and the forms... note the spiffy Aluminum clipboard. 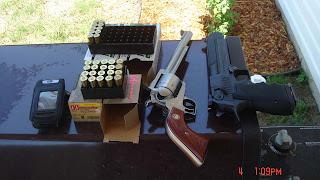 All of the above are placed ever-so-professionally upon the top of my Weber.

Second, paw the Ruger and set up with it in my right hand and the meter in my left hand held against the left side of the grip and as near vertical as I can manage.

Third, draw the hammer back, take aim and squeeze trigger.

Fourth, look at the meter and be confused by the 41 dB it is showing.

Fifth, realize that I did not set the "hold max" feature on the meter and have no idea what the loudest noise it recorded was.

Sixth, reset in the position noted in the second step.

Eighth, set the "hold max" feature. Set now so as to not record the cocking action.

Tenth, place the firearm on the Weber and record the data point.

Repeat four more times with only one more of the did not set the "hold max" feature. Repeat six more times as I did not believe the data and I blew it on two data points.

Repeat six more times with the meter being moved to near my left ear.

Next, grab the Desert Eagle and repeat the above steps and add a put safety on/off step for near grip and near left ear data collection.

Next, get reminded why I don't shoot 180 grain ammunition in the Desert Eagle. Yeah, the book even says 240 grain minimum, anything less will not cycle the firearm properly... guess what? It means it. 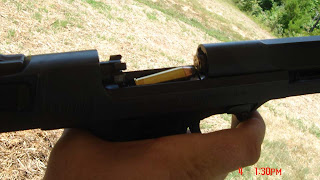 A classic extractor did not eject the shell and attempted a double feed. 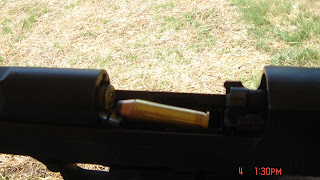 A bit clearer view of the double feed.

Now, repeat the above, without the forget to set the "hold max" feature and without the double feed, using 240 grain Hornady Jacketed Hollow Point eXtreme Terminal Performance ammunition.

All worked well here except that I forgot the Desert Eagle doesn't like Hornady either. The Hornady ammunition is just a bit longer and you can only fit four to five rounds into the magazine before the bottom one sticks. Once one is stuck, plan on monkeying with it for awhile to get the stuck one to drop back out. So, I did these six round sequences a whopping three rounds at a time. 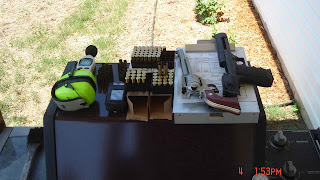 All of the "equipment" except the glasses lined up. 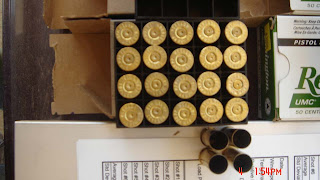 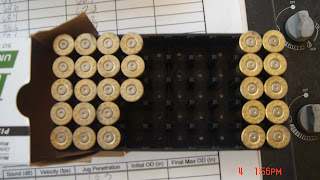 All of the data is posted here. Yes, I am too lazy to copy and paste the data from a failed experiment to here. ;)

So, after a fair bit of discussion and reading, I have come to the realization that the meter is very likely the root of all evil (insufficient range of measurement and insufficient sampling rate) here in this failed experiment. And, now I have to determine what my next course of action will be.

Things that I did notice during this experiment.
1. I noticed that the data was ridiculously out of range for what I "know" to be true, but I kept on collecting data because it was fun. :)
2. The Ruger is shooting high. I wonder if that is because I am shooting one-handed where I would normally shoot with two? If so, why did I not see the same phenomenon while shooting the Desert Eagle? And, I am the first to admit that I normally fire both of these with both hands... on deck, as it were.
3. The meter showed around 50 dB at the hammer draw on the Ruger and at the safety disengage on the Desert Eagle.
4. I have never before continued to collect data when I "knew" it was incorrect, but it was fun. :)
5. The Desert Eagle is a fussy little... critter. But, I knew that anyway and it is still one of my favorites, nix that, it is my favorite and if I could conceal it, I would carry it. It is fiercely dependable when fed the proper diet.

Research the topic more thoroughly, ascertain the correct equipment, develop an appropriate procedure and try again. I am now more curious than ever. As always, input is always & absolutely welcome here at the Rewst.
Posted by Dan at 8:40 PM