So, there is this guy who has some of (one in particular) his "freedoms" abused/removed/confiscated... for having the audacity to voice an opinion... One that is unsavory to some... BTW, I put quotes around freedoms because this thing is listed in the Bill of Rights... not the Group of Freedoms...

Now, the latest BAG request or Buycott is to purchase a firearm in... perhaps remembrance, or solidarity or some other such effort to commemorate the anniversary of the aforementioned event.

The pistol that I have traded for isn't here yet and the exchange was begun yesterday... so, it really doesn't qualify as a buycott item... but, I intend to show it off anyway... 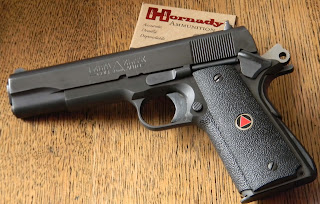 10mm Auto Colt Delta Elite: There are many like it, but this one is mine.
While it is not my first 10, it has been a very long time since I have owned a 10... This one was probably made about the same time as the last one that I owned... which was the early 90's... probably. It has one bubba'd grip screw, as seen in the above picture with some wear on the bluing at the muzzle end of the frame and some wear at the back of the trigger. Other than that, it looks pretty clean. Upon disassembly, I note that the previous owner had installed a recoil buffer. I have heard good things about those and will leave it in place for now.
Posted by Dan at 6:20 PM